WTH! Who killed my pod - Whodunit?

A few days ago, I deployed a brand new application onto a self-managed Kubernetes cluster (hereafter referred to as Kube). Suffice to say, all hell broke loose. The pods were getting OOMKilled with error code 137 left and right!

Now, I know a thing or two about Kubernetes1,2. I am not a total Kube noob!
But, I could not figure out what the fudge was going on actually! Besides, this app has been thoroughly tested and profiled and ran fine on bare metal and virtual environments.

This sparked a massive hunt for the culprit, and some interesting insights were discovered. Worth noting, similar investigating has also been done on by Line Corp in their excellent blog however, I have a different story to tell!

In this writeup, I am going to talk about this particular incident and the insights I have uncovered about both Kube and Linux kernels.

Context of the app

The app runs some intensive numpy and Tensorflow computations to produce some artifacts and associative metadata. The workloads are more memory-intensive as they operate on rich multi-media content. Other gory details besides resource requirements of the app is irrelevant for this discussion.

The average resource requirement, for this app, is very fluctuating yet predictable (in a given range). At least so we thought looking at our metrics:

Figure 2: Average resource requirements of the app when run on VMs or bare metal

I hear you, the resource utilization is not following a zero gradient line (fig 2)! It would be awesome to have constant non-flapping resource requirement needs - so clearly some work needs to happen on the app here. Having said that, it’s an absolutely acceptable and supported workload.

Ok, so the app was deployed and now, we will look at the line of investigation:

The provisioned app pods started to get killed as frequently as every 20 mins or more with error code 137 and reason OOMKilled.

Figure 3: The killer is on the loose! - Whodunit?

Let me explain a few things about the failure first:

Takeaway 1: Either Container Runtime/Interface or OS Kernel killed my process because supposedly it was misbehaving and causing the out-of-memory issue! Essentially, I am ruling out the manual kill because that was simply not the case!

Deep-dive into factors at play here

The app was initially deployed with Burstable QoS with Memory requirements set at request: 4Gi, limit: 7Gi, and CPU set at 2 for both requests, limits (see fig 2). The nodes were AWS r5.2xlarge type with 8 CPU, 64GB RAM, running Debian/Linux. Other than Kube system components and the app, nothing else was deployed on these nodes.

Noteworthy observation: - Node monitoring tells us that is running healthy and has plenty of resources at its disposal. - the pod is still OOMKilled but not all app pods on the node, just one is killed.

I am still clueless. So, caving in, I decided to use up this extra memory floating around and beef up the nodes a bit more and buy more time to do a proper investigation. Now, the apps are redeployed again with RAM request 4Gi, limit: 31Gi (leaving 4GB for other misc system components).

Did that ameliorate the problem - no! Of course, I am being silly about this, I should be making it guaranteed to have better chance of avoiding OOMKill.

So, my apps are running with guaranteed QoS with 31GB of RAM as required/limit. Node still seems healthy and shows no sign of duress.

Hows the app doing with the new revised configuration: still getting OOMKilled with 137 error code left and right!

Meanwhile, we uncovered random memory surges in some pods (see figure 10). These surges occurred very rarely and did not match to the duration of out-of-memory kill events. In fact, the frequency of OOM was much higher than these memory surges. 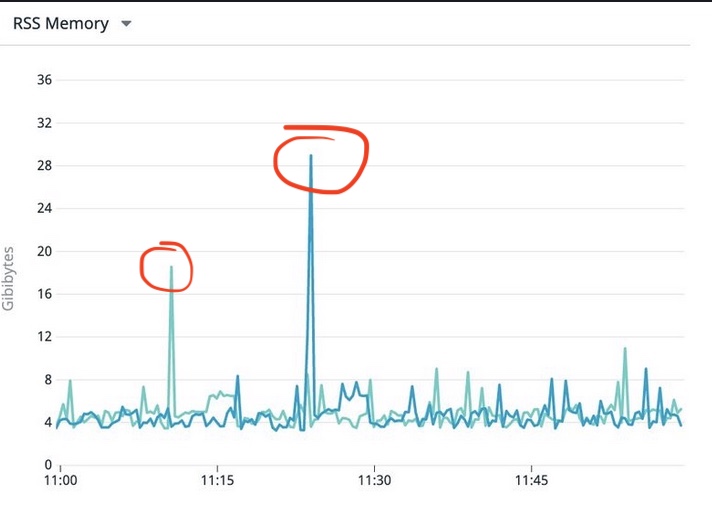 Figure 10: The notorious spike of memory use on pod

While these surges are worth investigating, they are still within the request/limit range (28.x Gi suurge on 31Gi request). So they still don’t justify the OOM event.

Based on Takeaway 1 & 2, we look at who is firing the kill signal. #Whodunit

Kube events for pod and other higher-level abstractions

Investigating, on Kube Events there is no record or any OOMKill or any event signaling anything malicious.

In fact, according to my Kube event stream kubectl get events, Kube is all healthy and there is nothing to see, nothing to worry about there! It shows that containers are clearly being restart but it seems to be not capturing any adverse event and bringing it back up to keep to desired declared state on attached replicaset.

What are the CRI and kubelet doing?

Looking at the system journal, there is nothing noteworthy recorded for OOM.

Normally, in the event of OOM triggered by Kube, we should see kubelet recording some signal for oom e.g. An OOM event was triggered

Takeaway 3: As far as Kube is concerned, the pod is well behaved and it’s all hakuna matata!

Based on the previous 3 takeaways, the only potential suspect we have is OS kernel. The pods are still crashing and metrics, events, and Kube level logs do not justify the observation.

But before we look into this, let’s do a bit of a deep dive into related concepts:

In my case, memory cgroup ran out of memory and my stack trace confirms this (see fig 12). It tells me that the application container was killed because it was consuming 1.5MB shy of memory set as limit (31457280 KB). 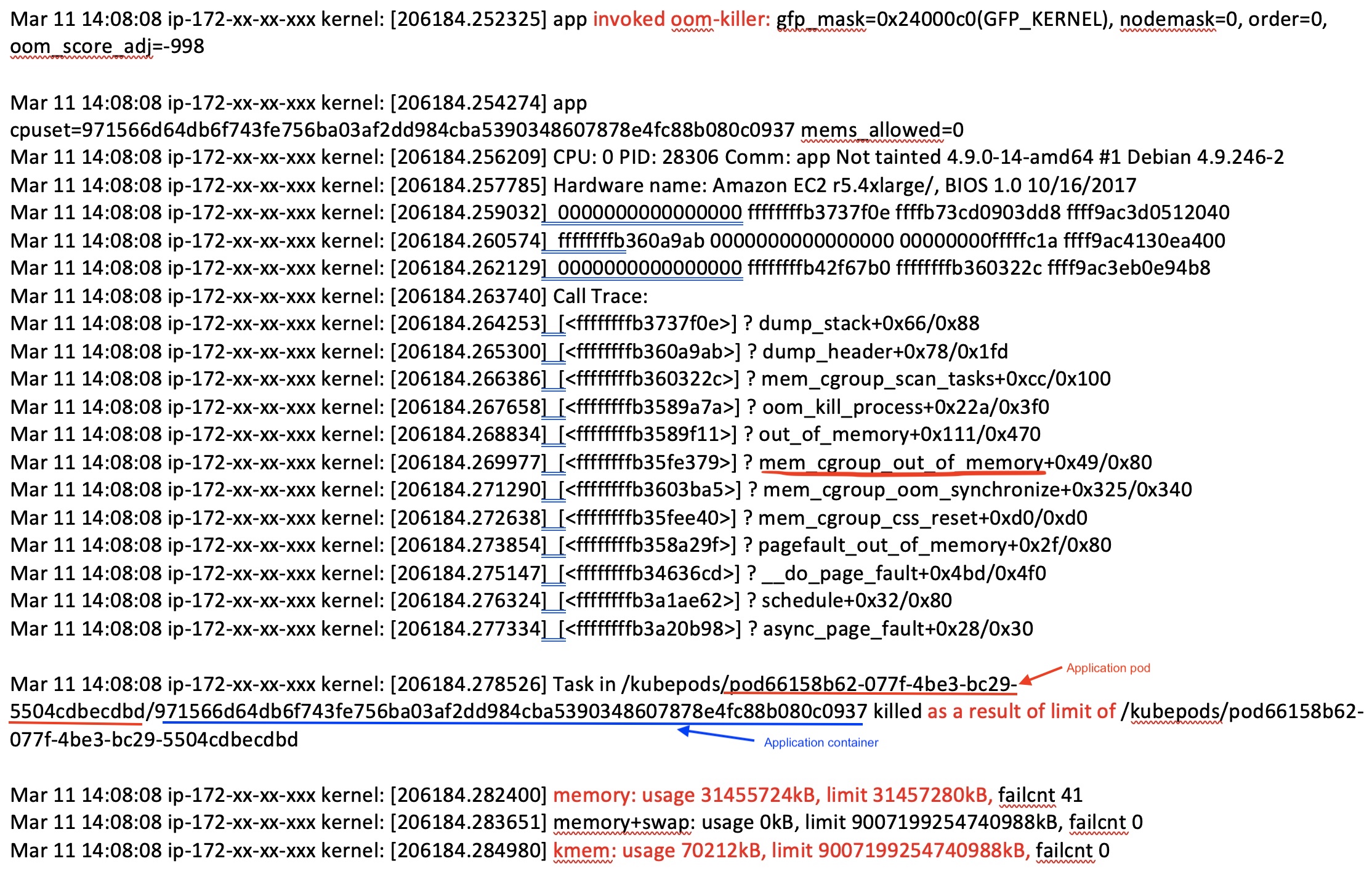 OK! this explains the OOMKill but why:

a. My monitoring only shows 29GB as max memory surge!

b. I never noticed beyond 9GB usage in local/testing/profiling and all the jazz!

This simply does not add up! Let’s hold on to this thought for a bit and look at the rest of the logs and what it says:

Before we go into part 2 of the log, I should explain a few things:

Now, as discussed previously, the swap is not being used in this system. See the second part of the logs in fig 13. You will note, there are two containers recorded and their memory stats is a capture - a) the pause container and b) the app container. We can ignore the pause, it’s tiny and looking very healthy. But look at the stats for app pod in fig 13 (below)! At the time my app was killed, it held about 29GB in hugepages and only 1.3GB extra in RSS. That’s huge and remember monitoring it not picking it for some reason! It captured 29GB but not 31GB! Perhaps its picking only rss_huge and presenting it as rss erroneously! ¯\_(ツ)_/¯! Yes, we have a problem but this monitoring issue is for another day!

My app has freaking 62GB in total virtual memory! What’s going on!

Ok, so “total-vm” is the part of virtual memory the process uses. A part of this “total-vm” that’s mapped to RAM is rss. Part of rss that’s allocated on to real memory, blocks is your anon-rss (anonymous memory), and the other part of rss is mapped to devices and files and termed file-rss. If my app goes crazy and allocates a large chunk of space (say using malloc()) but never really use it then total-vm can be high but it won’t all be used in real memory. This is made possible due to overcommit. A good sign of this happening, given swap off, is when total-vm is high but rss is actually low! This is exactly what’s happening here! We have about 30GB difference between total-vm and rss.

Takeaway 7: We have two problems here: a) Supporting over-commitment and b) Allocation of what we suspect un-needed memory!

Let’s look at solving the over-commit first and see what level of fixes it provides:

So far, we have concluded over-commitment is a problem. Well, as discussed previously, it’s a feature (of both kernel & kube) apparently!

Kernel uses the “extendability” of virtual addressing to over-commit. The kernel settings vm.overcommit_memory and vm.overcommit_ratio is specially designed to controlling this capability. For more info, see here.

1.1 vm.overcommit_memory = 0: Make best guess and overcommit where possible. This is the default.

1.3 vm.overcommit_memory = 2: Never overcommit, and only allocate as much memory as defined in overcommit_ratio.

vm.overcommit_ratio is only used when overcommit_memory=2. It defines what percent of the physical RAM plus swap space should be allocated. This is default to 50. We want this config to be 100.

But the use of sysctl to set these(using the following) is not enough as the config won’t persist on horizontal scaling (new node spinning due to spot instances or less important but restart):

The effect of these configs is immediate and no start is needed. Talking about the restart, systcl cli config update do not persist, system config needs to be updated in /etc/sysctl.conf to persist the setting across restarts.

On Kube, kops provisioned clusters, these settings need to be supplied through sysctlparameters config but these are only supported from kube 1.17 and higher! Safe sysctl parameters can be set at pod level however our setting is not (obviously) supported at the pod level. One can’t use additionaluserdata for this either, as these settings are overridden when kops provision node as Kube node! 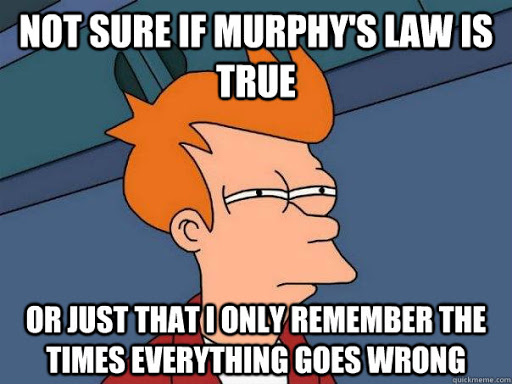 So, I say our my prayers, and turn to bash:

I see a massive improvement in OOMKills. Pods that were killed every 20mins and odd, are chugging along with 24hr processing and no crash still.

Figure 14: Getting somewhere! OOMKills sort of under control!

So, perhaps we can upgrade Kube and make this configuration systematic!

Remember, part b of our problem in takeaway 7 i.e. b) Allocation of what we suspect un-needed memory!.

Why was it happening in the first place, and why it’s controlled with overcommit disabled. I won’t lie, it still happens but far less infrequent!

it’s not fixed yet!

Oh! the fun never ends! All the places we go! I will cover this later, ahem ahem, when I know the answer! Pretty sure it’s some nasty behavior of Tensorflow 2, and the investigation is underway! 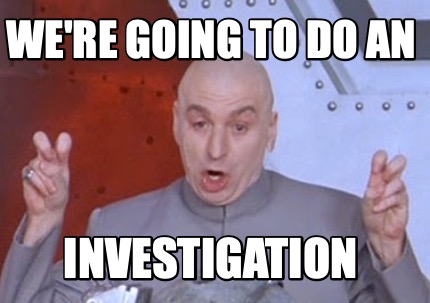 Thanks for reading. Hopefully, it was a fun insightful read!