Machine learning (ML) is an interesting field aimed at solving problems that can not be solved by applying deterministic logic. In fact, ML solves problem in logits [0, 1] with probabilities! ML is highly iterative and fiddly field with much of its intelligence derived from data upon application of complex mathematics. Sometimes, even a slight change such as changing the order of input/data can change the outcome of ML processes drastically. Actually xkcd quite aptly puts it: 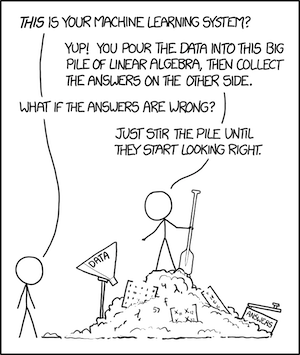 This phenomena is explained as Change Anything Changes Everything a.k.a. CAKE principle coined by Scully et. al in their NIPS 2015 paper titled “Hidden Technical Debt in Machine Learning Systems”. CAKE principle highlights that in ML - no input is ever really independent.

What is reproducibility in ML

Reproducibility as per Oxford dictionary is defined as something that can be produced again in the same way.

In ML context, it relates to getting same output on same algorithm, (hyper)parameters, and data on every run.

To demonstrate, lets take a simple linear regression example (shown below) on Scikit Diabetes Dataset. A linear regression is all about fitting a line i.e. Y = a + bX over data-points represented as X, with b being the slope and a being the intercept.

Above ML code is NOT reproducible. Every run will give different results: a) The data distribution will vary and b) Obtained slop and intercept will vary. See Figure 3.

In the above example we are using same dataset, same algorithm, same hyper-parameters. So why are we getting different results? Here the method train_test_split splits the diabetes dataset into training and test but while doing so, it performs a random shuffle of dataset. The seed for this random shuffle is not set here. Because of this every run produces different training dataset distribution. Due to this, the regression line slope and intercept are ends up being different. In this simple example, if we were to set random state for method train_test_split e.g. random_state=42 then we will have reproducible regression example over diabetes dataset. The reproducible version of above regression example is as following:

Importance of reproducibility in ML

Non-reproducible single occurrences are of no significance to science. - Popper (The logic of Scientific Discovery)

Importance of reproducibility is increasingly getting recognized since Nature’s Survey (2016) reported a reproducibility crisis. As per this survey report, 70% of researchers have failed to reproduce another scientist’s experiments, and more than 50% have failed to reproduce their own experiments. With more than half of participating scientist agreeing to the presence of reproducibility crisis, it is indeed very real. Dr. Joelle Pineau, an Associate Professor at McGill University and lead for Facebook’s Artificial Intelligence Research lab, covered the reproducibility crisis in her talk at International Conference on Learning Representations (ICLR) 2018 you tube. She is determined to nip
this crisis in bud from AI researchsrc. Its not just her, several AI research groups are coming up with measures to ensure reproducibility (example below):

Aside from being of no use if cant be reproduced, as Popper suggested in above quote, why does reproducibility matters?

Machine learning is inherently difficult to explain, understand and also debug. Obtaining different output on subsequent run just makes this whole understanding, explaining, debugging thing all the more challenging. How do we ever reverse engineer? As it is, understanding and explaining is hard with machine learning. Its increasingly harder with deep learning. For over a decade, researches are have been trying to understand what these deep networks learn and yet have not 100% succeeded in doing so.

From visualizing higher layer features of deep networks year 2009 to activation-atlases i.e. what individual neurons in deep network do year 2017 to understanding how deep networks decides year 2018 - are all ongoing progressive efforts towards understanding. Meanwhile, explainability has morphed into a dedicated field ‘Explainable Artificial Intelligence XAI.

If anything can go wrong, it will -Murphy’s law

Correctness is important as Murphy’s law rarely fails us. These are some of the examples of great AI failures of our times.

Figure 4: Example of some of the great AI failures of our times

ML output should be correct in addition to being explainable. Reproducibility helps achieving correctness through understanding and debugging.

ML output must be credible. Its not just from fairness, ethical viewpoint but also because they sometimes impact lives (e.g. mortgage approval). Also, end users of ML output expect answers to verifiable, reliable, unbiased and ethical. As Lecun said in his International Solid State Circuit Conference in San Francisco, 2019 keynote:

Reproducibility in preceding layers are needed to build out and extend. Can we build a building outline model if we cant repeatedly generate roof semantics as shown in figure 5? What if we keep getting different size for same roof?

Extensibility is essential to utilizing ML outputs for consumption. As it is, raw outputs from ML is rarely usable by end-user. Most ML outputs need to be post-processed and augmented to be consumption ready.

The world’s most valuable resource is no longer oil, but data! - economist.com

To train a successful ML algorithms large dataset is mostly needed - this is specially true for deep-learning. Obtaining large volumes of training data, however, is not always easy - it can be quite expensive. In some cases the occurrences of scenario can be so rare that obtaining large dataset will either take forever or is simply not possible. For e.g. dataset for Merkel-cell carcinoma, a type of skin cancer that’s very rare, will be very challenging to procure.

For this reason, data harvesting a.k.a. synthetic data generation is considered. Tirthajyoti Sarkar, author of Data Wrangling with Python: Creating actionable data from raw sources, wrote an excellent post on data harvesting using scikit that cover this topic in detail. However, more recently, Generative Adversarial Networks (GAN) by Ian Goodfellow is being heavily used for this purpose. Synthetic Data for Deep Learning is an excellent review article that covers this topic in detail for deep-learning.

Give ML models e.g. (GAN) are being used to generate training data now, its all the more important that reproducibility in such application is ensured. Lets say, we trained a near perfect golden goose model on data (including some synthetic). But the storage caught proverbial fire, and we lost this golden goose model along with data. Now, we have to regenerate the synthetic data and obtain same model but the synthetic data generation process is not quite reproducible. Thus, we lost the golden goose!

Reproducible ML does not come in easy. A wise man once said:

When you want something, all the universe conspires in helping you to achieve it. - The Alchemist by Paulo Coelho

But when it comes to reproducible ML its quite the contrary. Every single resource and techniques (Hardware, Software, Algorithms, Process & Practice, Data) needed to realize ML poses some kind of challenge in meeting reproducibility (see figure 6). 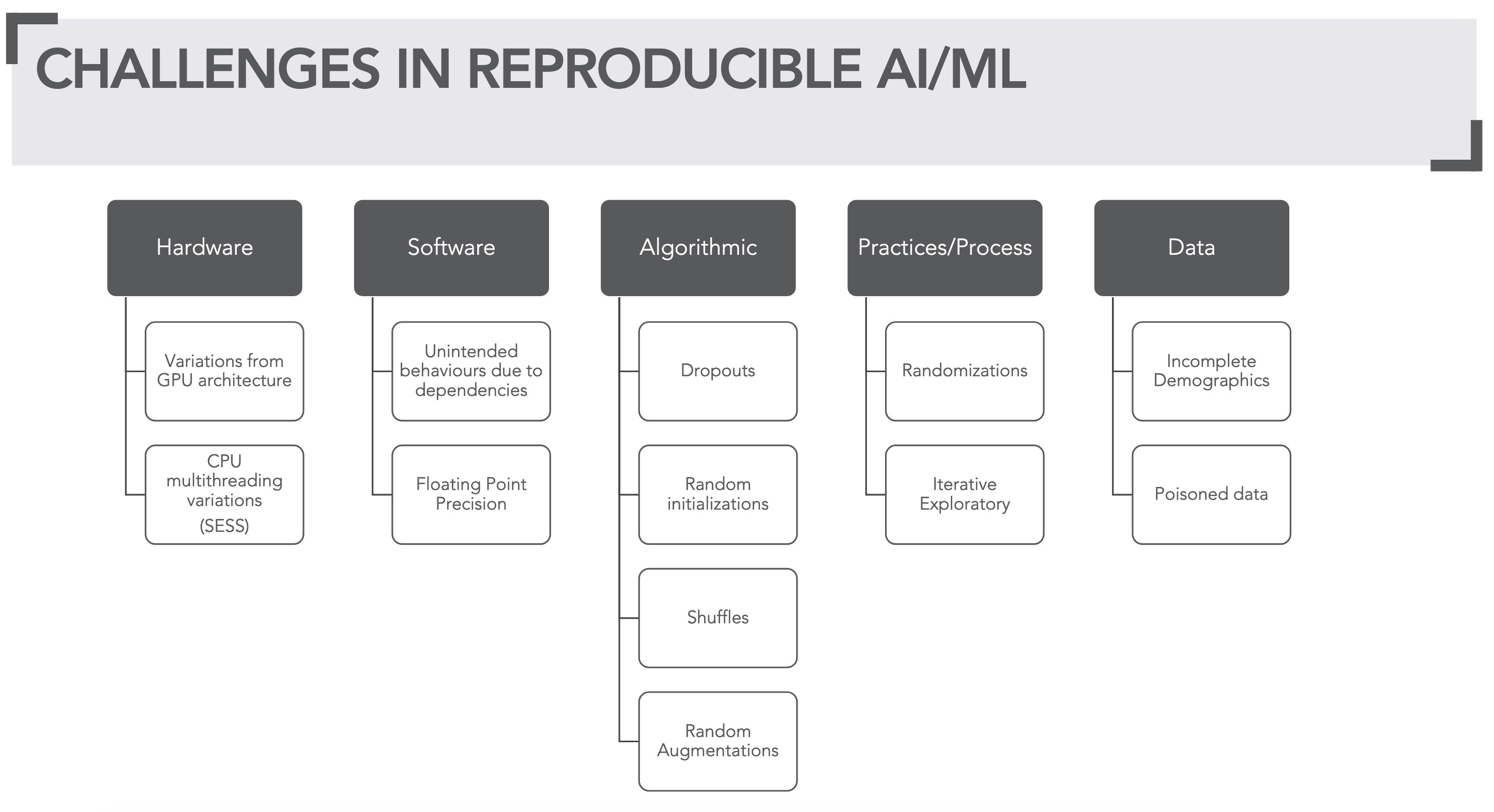 But these efficiencies in floating point computations both at CPU & GPU level comes at a cost of reproducibility.

Using Intra-ops (within an operation) and inter-ops (amongst multiple operations) parallelism on CPU can sometimes give different results on different run. One such example is using OpenMP for (intra-ops) parallelization. See this excellent talk by titled “Corden’s Consistency of Floating Point Results or Why doesn’t my application always give” Corden 2018 for more in depth insight into this. Also see wandering precision blog.

General purpose GPUs can perform vector operations due to stream multiprocessing (SEM) unit. The asynchronous computation performed by this unit may result in different results on different runs. Floating multiple adders (FMAD) or even reductions in floating point operands are such examples. Some algorithms e.g. vector normalization, due to reduction operations, can also be non-reproducible. See reproducible summation paper for more info.

See Corden’s Consistency of Floating Point Results or Why doesn’t my application always give the same answer for more details.

There is an excellent talk Duncan Riach, maintainer of tensorflow_determinism on Determinism in deep learning presented at GPU technology conference by NVIDIA 2019

Sometimes its not just trade off for efficiency but simple software bugs that leads to non-reproducibility. One such example is this bug that I ran into resulting in different geo-location upon same computation when a certain library version was upgraded. This is a clear case of software bug but underlines the fact that reproducibility goes beyond just computation, and precision.

When things dont work with ML - we randomize (pun intended). We have randomness everywhere - from algorithms to process and practices for instance:

To to ensure that randomness is seeded and can be reproduced (much like earlier example of scikit linear regression), with python, a long list of seed setting ritual needs to be performed:

Can we ever win with this seed setting?

No input is ever really independent. Scully et. al 2015

Data is main input to ML algorithms and these algorithms are just compute hungry but also data hungry. So we are really talking about big data. When data volume is large, we are dealing with all sorts of challenges:

One of the reason for why a model rarely gets deployed more than once ref is Concept drift. Our concept of things and stuff keeps evolving. Dont believe me? figure 9 shows how we envisaged car 18’s to now. Our current evolving impression of car is solar power self driving cars!

Figure 9: Our evolving concept of car

So, now we dont just have to manage reproducibility over one model but many! Because, our model needs to continually keep learning in a more commonly known term in ML as Continual learning more info. An interesting review paper on this topic is here. 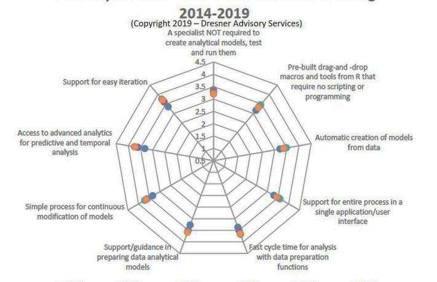 In fact, Continual learning is so recognized that support for easy iteration & continuous improvement were the top two features industry voted as their main focus with ML as per Dresner Advisory Services’6th annual 2019 Data Science and Machine Learning Market Study (see figure 10).